THE UNFOLLOWING by LYN HEJINIAN

The brain can be trained. I created a database of 1,146 lines for which I claim that any combination therein—from the smallest combination of a couplet to the longest of  a 1,146-line poem—is a legitimate poem. The possible number of combinations or poems (mathematical permutations) is, according to my son’s math tutor, a number with 3,011 digits, or a whole lotta poems. This review is not about me but I share this facet of my subjectivity since I am the author of this review: I am familiar with connecting seemingly random data. This is relevant to—a bias in—my reading of Lyn Hejinian’s THE UNFOLLOWING.

I actually wish I had read the poems before Hejinian’s Preface. For no explanation is required to comprehend the poems as each containing a logic that, for one, didn’t cause my reading to pause while I mentally scratched my head as my eyes moved from a line like (and here I open the book at random)

“If nothing had a cause, cows could be hatched from robins and balls that fell on one day might float on another”

“Gratefully we watch a silent film”

Or, as another example (from again opening the book at random), a line like

“We live on a world from which metamorphoses are drawn”

Now, some combinations are more effective than others—and I’ve been using two-liners to focus in on the succession of lines. What I notice is that, often (perhaps not always but many times), the intersection of realism and abstraction-or-philosophy is more powerful than mere listing. For example, a line like

“”The girls danced in dead light, the cadavers lay in live light—but as for those girls, men with mouths like mare vaginas watched them”

“Every rough rupture demands elasticity of the imagination”

In her Preface, Hejinian shares that 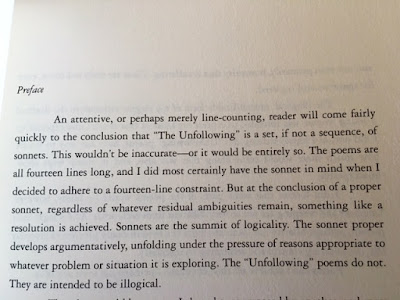 A useful (educational) introduction, even as the poems on their own, without Hejinian’s prefatory revelations, reveal a logic—an assurance that its body of words successfully created a poem.

In our time compressed by technology (internet) so that we can have the world in the privacy of our hermit-doms—e.g., “Alexa, what is the expected weather tomorrow in Abu Dhabi?” Alexa of Amazon.com, after explaining Abu Dhabi is in the United Arab Emirates, “Look for lots of sun with a high of 97 and a low of 80”—is it still a reach to expect the reader to work to connect lines that were specifically designed to be ordered illogically?

No doubt the answer depends on the particular reader: for some, yes; for others (perhaps the younger generation steeped in technology-facilitated attention-switching?), no.  Certainly for me with that database of 1,146 lines, no.

What I will share, though, is that one reason the poems feel unforced (logical) in their unfolding is the music. Read this excerpt, for instance: 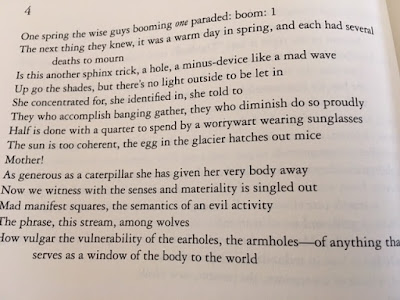 The ebbs and flows; the encouraged pauses as well as declarative and exclamatory tones; the flow of the long lines combined with the brief—they all provide a pleasing read. Indeed, if the above excerpt is read out loud, the reader won’t (or, I as reader, didn’t) feel the tension of a line going too long or slackening or a shorter line feeling interrupted; as well, I relaxed right into its syncopations.

The music is relevant for Hejinian’s content is everything else beyond the initial impetus of her project: the death of a young relative as a result of cancer. She covers how “there has been much to mourn in the public sphere, too. Indeed, there is ample cause in the world for real political anguish and justifiable cosmic despair. Whatever checks on capitalism’s rapacity existed (or perhaps only seemed to exist) even a decade ago are all but non-existent now. More and more brazenly, capitalism commits crimes against humanity. And, indeed, it isn’t only, and not even primarily, humanity that is suffering. These are truly sad times, even for sparrows and ragweed.”

That’s a huge expanse to put into an 89-page book. Hejinian succeeds because what fills in the cracks between her lines is music, and music is one of those elements like air that can shift-shape into what’s open (the definition of “open” including the receptiveness of a reader). THE UNFOLLOWING reveals a Master Poet at work—and it’s a joy to behold and hear.

With such a large terrain addressed—mourning a relative and then the world beyond immediate family—it’s logical, too, that even humor raises its mischievous head, e.g. this line

“The only elephant in sight is calmer”

for a wonderful dead-pan effect. At times, humor’s presence can attest to the author’s range and wisdom. That it exists here, I believe, is a positive testament to Hejinian’s brain. After all, she says in her Preface, “Laughter and weeping are not so very different from each other. And if logic can’t prevail, perhaps hilarity can, as an attribute of a revolutionary practice of everyday life, dismantling control and reforming connectivity.”

So. Because the brain can be trained, it seems to me that these poems can last through at least this century whose beginnings are steeped with demands to multi-understand (as in multi-task) the explosion of information, including horrors, that have pressed their way into our most private interiors.

I’ll end with a favorite excerpt from this book-length poem:

“Let us go then, you and I, in pajamas through the sky, in which we’ll do a rice and pie, we’ll drink from apples made of lace, we’ll topple statues, invent space

There in her hand is a slice of bread, its surface just beginning to stiffen

Can we question this” 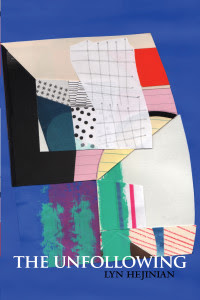 I want to indicate a, as they say, Shout-Out to the book’s cover art and cover artist Sofie Ramos.  I thought the marriage of the visual and the text to be effective—logical—in addition to being a lovely display of the artist’s skill as a colorist.  Here’s the artist’s “PROCESS NOTE”: 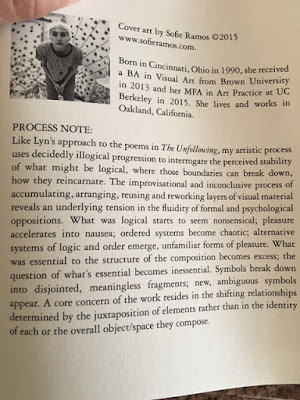 It’s fair to say that Ramos’ own response to the poems are a review as well, one with which I found empathy. I’m grateful to the publisher OMNIDAWN and/or whoever thought to present the visual artist’s own take on the poems. It’s a practice that should happen more often in poetry and other publishing where art is a layer to the overall project.