Erasure projects partially record the act of reading, and in so doing create a new text from the one being read.  A book created this way makes the process of its own creation obvious, and places the vitality and embodied nature of reading at the forefront of awareness, on the book’s own skin.
Reading marks the body, whether it is a person’s body or that of the text being read. Anti-Humboldt is a reading of a text that has marked bodies in countless, overt, unsubtle and abusive ways. The North American Free Trade Agreement, from which Anti-Humboldt emerges as buildings emerge from a fog, is an oppressively precise document detailing all manner of objects and how they are to be made, moved, managed, marketed and mastered. The behavior of these objects, and by extension the behavior of those who have contact with them, is regulated down to the last mote of matter. But nowhere is there any language approaching acknowledgement of the lived reality of the actual people whose existence is also tightly controlled and limited by the mandated disruptions imposed by the NAFTA regulations. There is no room for lives or people in the text, no value allowed to the people excluded by the words, made less relevant than the endlessly listed objects and parts of objects that people, after all, have made or grown.
The absence of human bodies from a trade agreement has echoes in the lack of space for language that conveys the real consequences of that agreement.  In his process essay, “On Anti-Humboldt,” Manríquez draws attention to the lack of legal language that adequately reflects the specific needs of Mexico’s people as they bear the brunt of physical, emotional and economic violence enabled by the conditions created by NAFTA. Though not at all equipped to right social wrongs in an active way (by directly improving social conditions for the people), poetry may be able to illuminate the problem:

The breach between language and world has been an old problem for poetry.

What implications would this apparent having no name of Mexico’s social reality have for poetry? If the break manifested itself as a caesura in the language of law, wouldn’t this also be a unique occasion for poets to interrogate such caesuras and reconsider the formal possibilities of poetry? […] It seemed to me that what poetry can “accomplish,” in this project, had to begin from the re-politicization of language (72).

So, part of the experiment of Anti-Humboldt involves the politicization of language through radical re-reading (re-vision at its best), plucking from the haze of overly-specific terminology a kind of hidden reality-flow, through the paradoxically revealing act of erasure.
Erasure, used this way, tends to do two things. First, it provides a “re-worlding” through the act of rewording. An erasure project can expose the source text’s own antidote, contained within itself and waiting to be revealed by a visionary reader. Sometimes this antidote is more direct and obvious than others. Here, we are offered a reading that approaches the problem of NAFTA’s disappeared Mexican populace, while at the same time turning the jargonistic verbiage of the document against itself:
(click on images to enlarge) 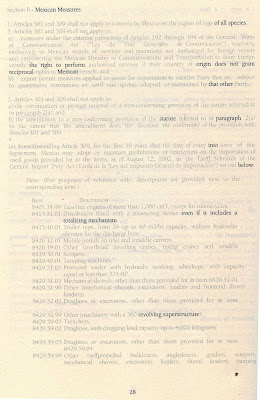 The “totalizing mechanism” of NAFTA is a fiction treated by the affected nations as a solid thing; artificial conditions it sets down are made actual by enforcement. The unreal manifests as reality in bodies, in space, in things. Yet the stability of this fictional mechanism—the very acceptance of its ability to provide a totalizing context—is questionable. It is a “revolving superstructure,” which conjures up the image of a revolving door, allowing movement between and across borders, states of being, and ideas. Is a revolving door solid, stable, unchanging? Is any revolving thing the same from all angles, behaving consistently? Not necessarily!
The second tendency for erasure’s flow is to repurpose dull, harmful or soul-numbing language for poetic purposes, transforming flatness and functionality into joy, humor or catalysis. There are many examples of this tendency in Anti-Humboldt. This is where the skill of poetic reading comes through, because it takes a great deal of poet’s nous to uncover magical potential in the NAFTA document.

Instead of writing “like a poet,” I am attempting to read like one: creating hollows, pauses, holes, limbos. “Limbo” sonically bordering with “limbs,” much as appendages and appendixes are neighbors. Limbo: temporality of a suspended language. Limb: dislocation of an amputated language (74).

The gaps and smudges, those in-between places and extensions of language that Manríquez creates, are where the radical joy operates. We’re invited to find this joy, or our own version of it, by some of the more ridiculous results of his reading: 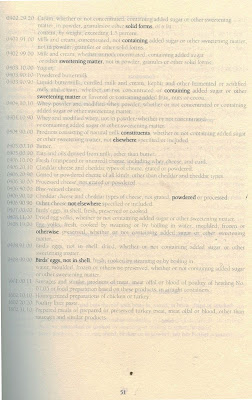 Speaking for myself, as a fellow poet-reader, the phrase “Birds’ eggs, not in shell” brings worlds of ever-changing pleasure as I play with it in speech, in mental image, in conceptual tussling. And the fun of the repetitive elements (“sweetening matter…sweetening matter”) makes this page of the project extra joyous. Everything I love about erasure is contained in this extract. It is a revolutionary act to invite readers to find joy where it had been deliberately engineered out. It is a life-affirming act to read a text that has been repurposed to serve poetic power, to serve the spirit and the body by causing laughter and transformative thinking.
Some other things about Anti-Humboldt are important to mention. As the complete title indicates, this is a dual Spanish-English volume, with each complete erasure (with essay) included in a back-to-back format. This is necessary; the original source documents are not identical, given the functional differences in the two languages. (A French version of the document also exists, though it was not part of this project). Manríquez performed two separate readings and produced erasures of each text. Because I do not read Spanish, I have only focused on the English version; I’m very curious about how the Spanish erasure feels in the reader’s body!
Also, the choice to reproduce (actually, to apparently re-type!) the complete source documents was especially effective and was, I believe, also necessary. We see the context from which the new text was drawn; we experience the oppressive barrage of information. In some ways, this offers an analogous experience to the problem of the poet’s work itself. How do poets take refuge from the storm of data-noise long enough to create anything at all?  How do we make use of that noise as a dangerous medium, crafting it into something that changes its toxicity (or redirects it)? Anti-Humboldt is a partial answer.