The greatest gift any anthology can give a reader is to not only introduce exciting new types of writing, but also (and perhaps more importantly) to present writers who are currently making that exciting work. Family Resemblance does this, certainly, and stands firmly confident before whatever skeptics of the hybrid-genre designation might still exist.

Like many other Rose Metal Press anthologies, this volume is structured along a basic “what is it, what’s it look like, who does it, and how/why” format. The editors have clearly organized the book into eight sections (as one might guess, given the title) headed by distinct hybrid-genre terms: Lyric Essay, Poetic Memoir, Performative, and so on. Within each section we find an introduction, a helping of example texts, and practice statements by their authors. This is a structure that works well for teaching, but also yields a surprisingly comprehensive joy for recreational readers as well as active writers of hybrid-genre works. In this case, Family Resemblance works hard to make its content approachable to readers who may be less familiar with work that straddles, combines or defies categories.

Yet “approachable” does not mean unchallenging; this is a collection of exciting, varied, eye-opening work by uncompromising authors, many of whom grapple visibly and honestly with the existence of genre at all, or contest the labels placed on their work by editors and the marketing arms of publishing houses small and large. For example, Kazim Ali asserts in his practice statement “I Am No Hybrid, No Other than Myself,” “I did not mean to innovate but knew I could not speak” (126). The formal structure of his book Bright Felon (excerpted in this volume) enabled the book to be written in the first place, rather than arising out of a desire to shake things up. It’s a deeper need; a book that comes from a physical imperative within the author instead of a cosmetic choice to mimic some hot new form or change a series of words on a substrate. He continues on the next page, making his position even clearer:

Yes it is deeply entrenched heterosexism (a belief in genre manifests as a belief in gender—they are rooted in the same impulse: that a body (or text) must “behave” according to the social rules that govern it) that makes Bright Felon into “poetry.”

It’s not that Ali has anything against poetry, of course. The problem he points out is the obsession for categorization of texts and bodies according to gen(d)re, especially those categories and designations originating from outside the individual’s own experience and concept of selfhood (and/or the text they have created).  This is important—this apparent conflation of life and work, of body and text—because for many authors whose bodies and identities don’t fit within the narrow social expectations of their contexts, hybridity is the only way to go for their texts.  It’s a matter of language, as well as formal conventions that are not generous enough to allow for authenticity. How does Ali-as-narrator in Bright Felon find a subject position when

The myths do not write me though because I am I. There wasn’t one before me.

When I said what I said in the cold afternoon, when I said finally what I needed to say in that house, my father asked me, “Are you a Muslim?”

Dumbstruck, I had no answer.

I am I, a driftless star, disowned from his own constellation.

Who will be able to find the polar star now?

Authenticity comes at high cost, if the claiming of a particular subject position results in one’s removal from one’s context or any hope of recognition within it. This kind of authenticity requires not just the construction of the self but a place to be (and a language to contain) that self.

Jennifer Bartlett’s contribution is also presented in the Poetic Memoir section, and shares some risks with Ali’s work.  Both authors speak of creating or writing into a form that contains bodily experience other forms cannot contain, or actively reject. Bartlett too rejects the assumption that the hybridity was a choice from pre-existing options, emphasizing that the formal presence of her contribution was more the result of an ongoing process. Though this is an awkward paraphrase on my part, it might be like wearing a garment one is in the process of constructing, because there’s no ready-to-wear that doesn’t leave one unsustainably naked. Here’s Bartlett’s take, from “Necessary Ambiguity,” her author’s statement:

A hybrid memoir was not a conscious choice. It was an opening, a way to move through the work; I am, at heart, a poet. The piece leaves much unexplained, but I think somehow the affairs of life are necessarily ambiguous. And having an “impaired” body, or one that does not meet society’s narrow expectations, necessitates creating a new form […] My body is fragmented, my soul is doubled; how could my work not be fragmented as well (136)?

Bartlett’s contribution to the anthology is an excerpt from “My Body Is (the) Marginalia; The Sun Drawn a Saw Across the Strings.”  The questions raised in the statement are echoed and deepened in the contributed text, particularly on page 137: “how much does one’s ability to feel the other depend on one’s feeling for oneself/how much does one’s ability to be for the other depend on one’s ability to be for oneself.” Questions as ideas or rhetorical moves share space in “Sun Drawn” with questions as objects,  as things occurring in the narrative. “I want to change my pronoun to they/That way there will be one of me/For each of you at all times,” writes Bartlett to a lover. Further, “In sleep, your body curved toward me/Though dreaming you said Question” (138).

The passage from which the quotes are drawn concerns open marriage, and a close reading is needed to guess that “you” refers to the lover, not the husband—an inbuilt question of identity, enriched by the loveliness of the sleep utterance, which could be a naming, a directive, or an opening to a conversation (albeit a dream conversation).  This imperative to question—to write from a questioning space, or a permanent state of questioning—is, I think, an important unifying need throughout the entirety of Family Resemblance. And though it may be stating the obvious, both of the authors mentioned place questions of normativity—in gender, sexuality, abledness, religion, race, and intimate relationships—right in the hottest part of the spotlight’s circle. The hybrid imperative, so important to these texts, empowers a type of embodied engagement with the concepts and needs that form the bedrock of lives.

If the first unifying strain in Family Resemblance concerns the embrace of hybridity to contain the uncontainable, the second strain might be the push toward pictorial hybridity to encompass symbiotic modes of telling. Several approaches to pictorial hybridity are represented in the anthology. Craig Santos Perez and Miriam Libicki are two notable contributors in this area, each making very different choices to meet the needs of what must be said/shown.  Perez uses the spatial realm of the page as a physical location for multi-vocal stories; in/on the page the placement, look and behavior of language evokes and honors the communal experience of shared storytelling—a lived history that refuses to be papered over by colonizing language forms.

These talk-stories did not follow linear or predictable plots. They were often improvisational, fragmentary, and spiraling. These talk-stories were also communal because many voices contributed to the telling. Sometimes family members interrupted each other; sometimes family members told the same story from diverging perspectives; sometimes family members remembered stories differently. As families wove stories together, new stories became threaded and unraveled (342).
One fascinating thing about the visual storytelling in Perez’s text is the inseparable link, in the mind of the reader, between visual and aural. The sound of the storytelling is recreated in the imaginary space through visual cues, and the text is brought powerfully to life. See—hear—here: 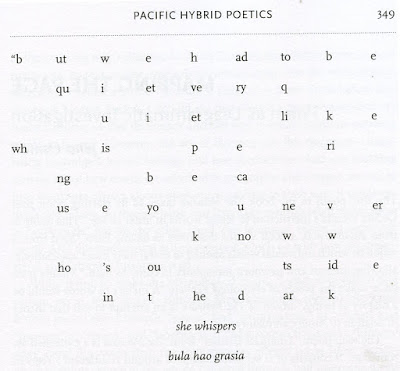 A staccato, hesitating, sibilant whisper fills the mind as this page is slowly, lovingly traversed. We are right there, both clandestine radio listeners/translators, and the “someones” who might be listening outside.

Miriam Libicki also uses the page to make a place for stories that are too big or deep to site comfortably within language alone. Her contribution to Family Resemblance is an excerpt from her project “Strangers,” which she describes as “a hybrid of journal writing and journalism” (363) and is a beautifully drawn and hand-lettered exploration of the complex consequences of an influx of African migrants into Israel. The story is not only complicated in a political sense; it touches on and resonates—often uncomfortably—with Israel’s own history. Roles of nations and peoples, individuals and institutions, are swapped and blurred. The crisis impacts Libicki in a personal way, which she makes plain by placing herself in the pages of her text: 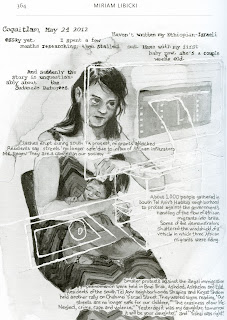 From the self-portraiture of a page like this, to the inclusion of illustrations of her own Facebook feed, to the simple use of the first-person, Libicki claims a subject position as concerned commentator, affected by but not involved in the situation. This self-inclusion works well to remind readers that we are experiencing events through the perspective of the author/narrator.

Another choice also reflects the author’s presence as both creator and curator of this text—a visual choice this time.  Further down on page 363, she reveals that she has “[pointed] the figures’ eyes at the reader” in her ink wash drawings, regardless of the direction of the peoples’ gazes in the news photos that she used as source material. This is a vital and powerful piece of editing, which Libicki does to draw the reader deep into the page and the story, hoping to kindle a more human/e and compassionate experience. Though ultimately driven by a different needs, contexts and foci, Libicki and Perez combine visual and textual language into unique forms that make it possible to tell a more complete story.

Family Resemblance is one of the most engaging and effective hybrid-genre anthologies I’ve experienced, both as a reader and a writer of hybrid genres myself.  After reading this book, those new to the idea of hybridity will gain a solid appreciation and understanding of the broad range of possibility contained in that “family” of textual approaches.  More experienced readers and writers will doubtless make new friends in its pages—I certainly have.