Editor’s Note: In 2003 I came to invent the poetic form “hay(na)ku.” Twelve years later, the first book-length collection of hay(na)ku in Finnish would be released: Puitten Uni (Sleep of Trees) by Heikki Lahnaoja and published by Finnish publisher ntamo in 2015.  I am grateful for Heikki’s interest and consenting to this brief interview: 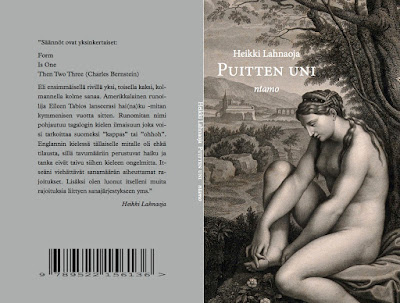 Eileen Tabios: I just want to confirm since I’m not Finnish-fluent:  The hay(na)ku in the book are authored by you?  In other words, they’re not English hay(na)ku by others that you translated into Finnish?

Heikki Lahnaoja: Yes, they are all mine. Not translations.

How did the hay(na)ku come to your attention?  What attracted you to hay(na)ku or what is your favorite part(s) about the form?

I cannot remember when I first bumped into hay(na)kus but it was somewhere in Internet. I like the restrictions in writing. It makes it easier to think. I have tried written tankas and haikus but counting syllables became quite boring very quickly.

How did the book project come about?  How long did it take you to write these hay(na)ku?

I had a blog where I write hay(na)kus. ( It still exists: http://hopsu.livejournal.com) The first one is written almost exactly 10 years ago 24th of February 2006. In the summer 2010 I wrote one every day. I think I compiled the book in 2012. ntamo had my first book published in 2013 and I later offered also this one to them.

Translation: There is left the summer of lilacs', rowans', oh apple blossoms'.

Translation: Eventually, some day, but not yet.

(You are free to stylize the translations.)

[Editor’s Note: For re-“stylize”ing a translation, I can imagine the third hay(na)ku to be:

—a poor example but which I provide as an example]

Where did you find the Charles Bernstein hay(na)ku?  Can you give me a loose translation of the Afterword? (Pp75-76)

I really can't find the source of Bernstein hay(na)ku anymore. It was in Internet.

The loose translation: These poems are written in hay(na)ku metre. The rules are simple: Form / I one / The Two Three... American poet Eileen Tabios invented the metre about ten years ago. The name of the metre comes from Tagalog and could be translated in Finnish as "oh dear". In English there could have been need for this kind of metre  because syllable based metres tanka and haiku don't work in English the best ways. I like the restrictions of hay(na)ku. Besides I have created my own rules considering the order of the words and how to split the sentences into lines. Tero Vainio suggested translating hay(na)ku as hai(na)ku - that was sensible advice. I thank my poet friend Aunimarjut Kari and my wife Juulia about comments -- this book is dedicated to the latter.

Would you happen to have a new hay(na)ku that you wrote after the book?

Snow
covers footprints.
And so on.

Were you aware of the form’s origin in Filipino culture?

No! I know the word hay(na)ku derives from Tagalog. (Am I right?)

[Editor’s Note: The History of the Hay(na)ku available HERE.] 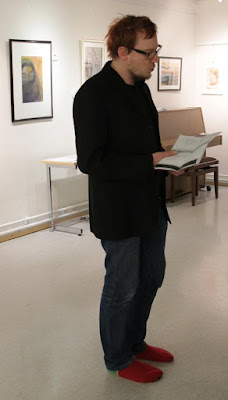 HEIKKI LAHNAOJA was born in 1975 in Pyhäjoki, northern Finland. Studied literature and library science in the University of Oulu. Studied animation for 3 years in Lybecker Institute of Crafts and Design. Wife and 4 children (10 yrs, 6 yrs, 4 yrs, 5 months). Works as chief librarian in the Municipal Library of Pyhäjoki.