A Picture of Everyone I Love Passes Through Me with collages by Lynn Behrendt and text mixed by John Bloomberg-Rissman and remixed by Lynn Behrendt
(Lunar Chandelier Press, Brooklyn & Chicago, 2016)

Words exist. Do we write or re-arrange what already exists?

Is this when we might lapse to the image for at least covering more territory—the picture as a thousand words?

Yet, images pre-exist before our presence, too.  Do we create or re-arrange...?

Nonetheless, A Picture of Everyone I Love Passes Through Me presents two authors, with one also acting visually as a collagist, who create meanings that would not exist without their input. Hence, we go back to poetry and literature not being simply of arrangement but a manifestation somehow of the particular writer’s/artist’s imagination and intelligence to offer a message. (This may seem basic but, recently, I’ve been looking at how letters are transformed into images of silent shapes, curves, lines… and how much I admire the poet-artist Nico Vassilakis' presence or subjectivity amidst iconic material.)

That’s the way it should be, and I’m glad to have reached that conclusion from this collaboration by Lynn Behrendt and John Bloomberg-Rissman. For any binary that erases authorial subjectivity is a false binary—subjectivity is part of being human. Indeed, the existence of the Introductions on their process attest to the significance of their roles: the reader learns that Behrendt’s collage approach reflects her efforts to understand the world; Bloomberg-Rissman collages to see the ruins among which he says he tries to exist (because the ruins exist).

Relatedly, among the collaged pieces are cut-outs, in whole or in fragments, of Behrendt’s face. I find this a source of strength to the work, in part because it emphasizes that the resulting images (and text) are due to somebody’s vision, which is to say, somebody’s existence. This is collage as inclusion while acknowledging that inclusion cannot occur without someone desiring and acting out the inclusion. Combined with the variety of collaged fragments that disrupt linear logic in the connection of such pieces, grammatical tenses—which is to say, time—is even disrupted. Behrendt saw, is seeing, will see.  Here’s a collage that’s effective—indeed, seeing it made me wish something I wish about works I most admire: “I wish I’d done that!” In this case, I think this collage also says something about lucidity: 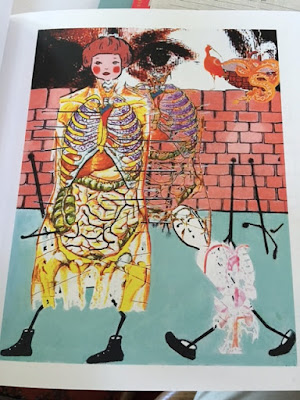 The eyes are not necessarily the first detail one notices in the above collage. But, for me, once I noticed the eyes they held my attention longer than the other details.  Behrendt saw, is seeing, will see.  The disruption of time is also interesting for evoking what I know of as specifically “indigenous time”—a time I’ve described elsewhere as where there is no past, present or future and all is one and one is all.

I am a long-time admirer and supporter of John Bloomberg-Rissman’s work (I published his Flux, Clot & Froth about which was said, “Truman Capote once famously said of Jack Kerouac’s work, ‘This isn’t writing, it’s typing.’ Had he lived he would have said of Flux, Clot & Froth, ‘This isn’t typing, it’s cutnpaste.’”)  The texts in A Picture of Everyone I Love Passes Through Me are indubitably Behrendt’s. That’s the way it should be as she gets the last word in remixing. But one can discern Bloomberg-Rissman, for instance, these words whose topic is familiar to me from other past conversations with and works by this poet—

So the biggest problem we face is a philosophical one: understanding that this civilization is already dead. The sooner we confront this problem and the sooner we realize there’s nothing we can do to save ourselves, the sooner we can get down to the hard work of adapting, with mortal humility, to our new reality where violence renews itself in the face of the apparent inexhaustibility of its object. So what does it mean to say, “I will build things anew…”

—which reflects Bloomberg-Rissman’s intention (elsewhere in his Introduction) of “trying to exist in the ruins.” Bloomberg-Rissman—or Behrendt—are not being fatalistic, per se, by acknowledging our doomed times. They still desire to make efforts in their lives rather than just passively accept the effect of larger forces like war, power, pollution, economic monopolies and so on. I admire the desire to do “the hard work of adapting” to these forces. We live in the macro (the larger world) but we also live in the micro (our individual lives).

In a work like A Picture of Everyone I Love Passes Through Me, one logically considers whether it succeeded on its own terms—does the text resonate against the image (and vice versa)? So, does it work? Sure! And it doesn’t just do so because there’s the occasional discernible text as a reference to an image, e.g. “songbirds in Germany” being partnered with a collage containing birds. Text and image relate to each other in tone, mood, palette … here’s a sample pairing: 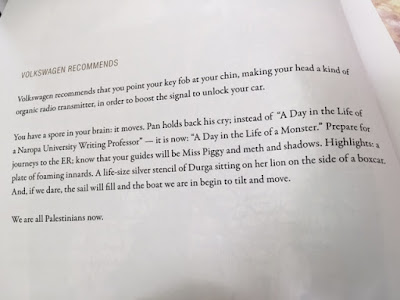 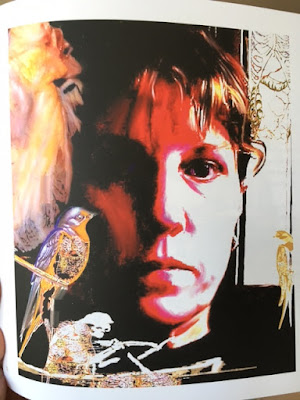 It’s a testimony to both Behrendt’s and Bloomberg-Rissman’s remixing capabilities that a poem succeeds when it begins with the title “VOLKSWAGEN RECOMMENDS,” cites Miss Piggy, and then ends with the powerful line “We are all Palestinians now.” Against this narrative, it’s appropriate for Behrendt’s face to be big (rather than, as in other artworks, be tiny and not immediately discernible) for her “I”—as with all “I’s—are implicated.

An interesting irony—which is also a strength—to this text/image collaboration is how the texts and images work effectively on a stand-alone basis. This is important because the relationship between text and image may be clearer in some pairings than other such couplings. What then would move the viewer/reader to connect the presented combinations? Well, it can be the individual power of the works. If one of the text/image diptych is weak, I, for one, would not be (as) compelled to continue pondering the relationship between the two. Thus, each work together results in 1 + 1 > 2; there is the result of reading text, looking at image, then considering both in relation to each other for an enhanced (third, thus > 2) response.

Here’s another image that attests to Behrendt’s strength as a visual collagist: 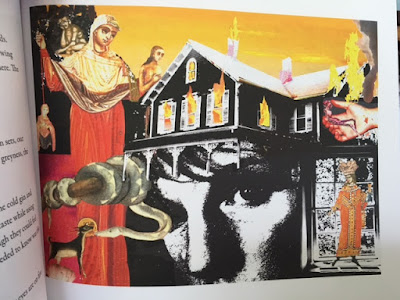 The face takes up so much space and yet it doesn’t aggressively leap out ahead of the other details so that the surface impression is at balance—this may be another way of noting how seamlessly or logically the collaged details combine together, even when the elements individually may be more at odds. (Unexpectedly, I feel the face leaps out more boldly in this reproduced version for this review, versus as an image in the book—which is to say the reproduction never reproduces 100% actually.)

As for Behrendt’s remixed text, her text-poems, I open the book at random to choose an example of her deft intelligence and witty imagination; you’ll see here as well the resonance—and music—that coheres the fragments into an organic whole to manifest an open-ended story, a mystery leaning on the edge of something delicious and/or horrifying: 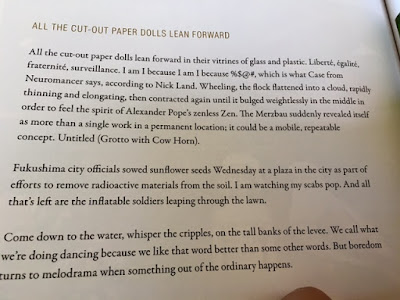 Indeed, while I’ve read other poems by Behrendt in the past, her remixed words make me want to return or explore anew her other works—a response that says something positive about the strength of the works.

It’s also worth noting that this book is yet another fabulous production from the publisher, Lunar Chandelier Press, which is helpful for enhancing the impact of the work.

Ultimately, the power of these works rely on how masterfully Behrendt accomplishes her collages and remixings. I use the term “master…” because I make this conclusion, too, as a practitioner. I know the difficulty of creating visual collage that offers a sense of organic wholeness precisely because I’ve mostly failed to effect that result.

As an aside, I feel I’ve been more successful when I use text to collage. I am currently writing a novel and, as a result of a trip to New Orleans, wanted to incorporate in this novel (that has nothing to do with New Orleans) a hilarious sign I spotted on one of the balconies in the city’s French Quarter—

TCHOUPITOULAS IS MY SAFE WORD

It wasn’t easy, but I managed to use the phrase … because I had the faith or choose to have the faith, and it seems to me (and this is why I raise it in this review) so do Behrendt and Bloomberg-Rissman, that words can work together in any combination for such is the power of art and poetry.  This book, for one, so testifies eloquently … and beautifully.  Perhaps the world would not be in such a dire state if its creatures, too, chose to work together positively in any combination with each other.