In the limited popular stereotype of feminism, playfulness (or the result of play) falls far outside the reach of the term. Susan Bee and Johanna Drucker’s Fabulas Feminae engages in deep and inviting feminist play.  This slim but sense-rich volume combines collage with feminist biography in which the text itself is raw material. Where Bee synthesizes whole images from scraps and swatches and swirls of color, Drucker applies Natural Language Processor (NLP) software to a series of factual texts about twenty-five extraordinary women, both those recognized by patriarchal histories and notions of importance (Elizabeth I) and not (Billie Holiday, Lucille Ball). The result is a collection of new texts powerfully reframing the question of factuality itself. Who decides what gets presented as truth about a woman’s story? Who decides how that truth should look? And who determines the rules for setting down a “narrative” of someone’s life?

I keep using scare-quotes around the word “narrative” because this book offers a practical critique of linear, authoritative (encyclopedic?) modes of biographical presentation. Drucker’s texts are composed through a move of serious play: running normative biographical text through a computer program called Hapex Legomenon, which analyzes and processes a given block of language to produce a new text resulting from the application of various programmed actions upon the original.

Use of a NLP program for text generation is very much in keeping with the overall ethos of feminist re-imagining and re-imaging in Fabulas Feminae. Hapex produces a text that’s difficult to square with patriarchal capitalist use of language—like the business-oriented onboard dictionary and grammar-check in Microsoft Word—because it cannot be “useful” in a reductive, endlessly cut-n-paste mode of knowledge consumption.  Biographies like Wikipedia entries (or dossier items) can be used to compartmentalize individuals, to demographically dismiss them, ensuring that the most superficial and easily repeated “facts” come to define or stand in for the person. This is what happens in data mining, where for authoritarian or commercial purposes we are reduced to our spending habits and/or our political utterances and associations. Data and personal history become weapons in the hands of violent authority and its philosophical infrastructure. By adopting, adapting and applying algorithmic processes for feminist use, Drucker offers an antidote to such practice, perhaps even an immunization within a viral shell. These are not the master’s tools any more!

Here’s an example. The standard biographical meat of Billie Holiday’s life always emphasizes Holiday’s “faults” and disadvantages, positioning her as a tragic genius whose inability to transcend her past ultimately meant her downfall. Such tellings fetishize the horror that real people live through—geniuses or not—and place the blame on individuals for so-called failures and weaknesses that are beyond individual control. Don’t get me wrong; Holiday’s life had real horrors, and she lived through situations of appalling violence, transforming that violence into art through her own algorithm. These are facts. But Drucker’s algorithmic use of those facts does not serve salacious interests:

This is a poem of strength, not failure. This is a compact, complex rendering of a complex person’s story. There is no shaming, overt or covert. Language, shaken up here and refreshed, provides a bigger space for Holiday than mainstream biography can. 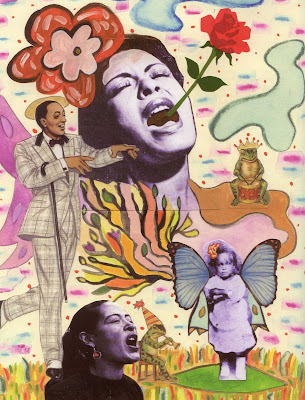 Holiday
This space-making is also done quite literally in Susan Bee’s collages, with Holiday’s serving as a great example. In this work we see multiple photos of Holiday herself at her most powerful—singing with her signature open-throated stance, head thrown back—a figure of action, putting healing truth out into the universe. In the largest photo she sings a rose, with the flower emerging from her throat almost as if it were a cornet or sax, showing that she worked on her voice as other artists would work on perfecting a different instrument, but that she remained independent from use of an external object to make her art. She is surrounded by images that imply a connection to myth and legend—a dapper-looking, smiling Black man, possibly dancing, graced with a halo, and a few frog musicians, including a “frog prince” with a crown and a large drum. Holiday’s band is something from a fairy tale, reminding us of her own legendary, mythic status.

But there’s a danger in living completely in a fantasy, as we are reminded by another central figure in this page. Look at the face of the winged girl. Her glorious butterfly wings and her golden flower hair accent do nothing to alleviate the pain on her features—fear, sorrow, anxiety, all the emotional results of an unsafe childhood. Despite her wings she is grounded, and so are we, forced to keep in mind that Holiday had a life that most people would be unable to endure (at both extremes, the good and the bad), and that escape into fantasy was never much of an option.  Perhaps there’s a warning here not to let the legend obscure the facts of her journey and therefore conclude that her power wasn’t real, or within human grasp. 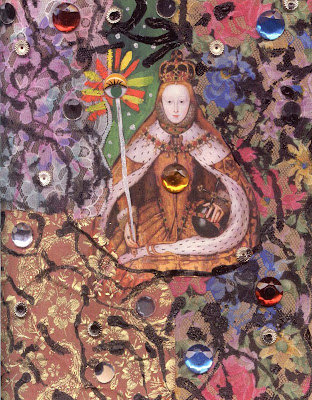 The same empowering remix yields deep results even with a figure legitimized by patriarchal histories, Elizabeth I, “[w]hose name has become an era a heart a head a queen” (np). But rather than producing a text that reinforces the values held by such histories, the Hapex program renders the more familiar tale of the Virgin Queen into a poetic adventure of intrigue, spies, political savvy and self-determination. Power is cast in terms of resistance to social norms and expectations:

Expected to continue the closest brush with marriage the Tudor line never. Capable and distinguished she refused. Produce no heir despite courtships many Raleigh, Dudley, princes, realms, but Dudley above all childhood friend (np).

Though the text gives no real space to analysis of the role Elizabeth I played in establishing the imperialist expansion of English interests, that’s likely because the source from which it derives also had limited focus in that area. Beyond “revisionist history,” Fabulas Feminae recasts its multiple protagonists into active subjects and presents elements of their lives that even those alienated by normative historical renderings can recognize from their own lives. Reclaiming history for those it excludes, and showing how we too might establish our own historical parameters and tools, Bee and Drucker invite us to definitely try this at home. In fact, we’re invited by implication to pass this gift on to future generations. The playful text and image combo is a very child-friendly, child-engaging object, and I can easily picture a little one picking up the book, becoming enthralled by the images (and text, if reading is part of the moment), and wanting to make some too. Though this is not a book “for” kids, it’s a book kids can certainly claim and treasure as their own. I like to think of this happening generation after generation—creating future history.